As you can see from the diagram below, the Giraffe is a very tall animal measuring a maximum of 19 feet (6 metres). The neck is a remarkable feature on a giraffe. It is still a mind-boggling characteristic of this animal. 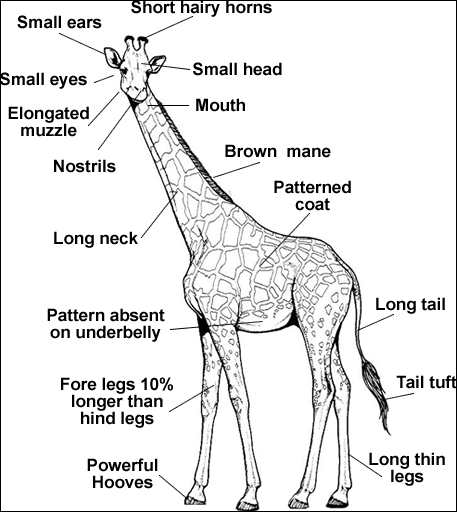 During evolution, like most mammals, the giraffes internal system synchronized to suit its lifestyle and the special valves grew simultaneously with the giraffes heart and neck. The legs on a giraffe are also very long and if you look at the picture, you will see that the front legs are longer than the back legs. This gives the giraffe the ‘sloped back’ look.

A giraffes neck can measure over 1.5 metres (5 feet) in length, however, it contains only seven vertebrae the same number as in most other mammals, including humans. These vertebrae are extremely long and are separated by very flexible joints. At the base of the neck, the thoracic vertebrae have spines that project upward, forming a hump over the shoulders. These bones support muscles that hold the neck upright, in the same way that cables hold up a construction crane.

The giraffes neck is so long that body modifications had to be required during evolution from shorter-necked animals like the Okapi. The heart of the giraffe would have to be very large in order to pump blood to the brain whilst the giraffe was bent over having a drink. Unfortunately, too much blood being pumped to its brain at one time would be fatal. This is why it does not happen. The giraffe has special valves in the vessels in its neck to ensure that the blood flow is adequate. These special valves are called ‘Eukaryote’.

Giraffes hides are a spectacular array of polygon shaped patches, usually brown in color. This hide is unique to each giraffe – no two hides are the same. Giraffes hides also help them to camouflage from predators in trees and woodland. The polygons are larger on the body than on the face and limbs and their underbelly usually has no pattern at all. Giraffes have short, dense fur with a unique pattern of dark patches that range from beige to chestnut brown. 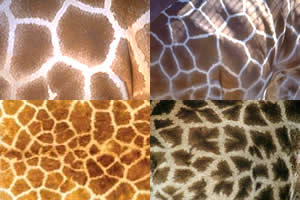 Although no two giraffe skin patterns are exactly the same, some regional patterns are so common and distinct that zoologists have identified a number of giraffe subspecies based on the patterns. One of the most striking of these subspecies is the reticulated giraffe, which has large brown patches separated by thin contrasting lines, making a pattern that looks like broken paving. Another variety, the Masai giraffe, has patches with complex jagged outlines. In all giraffes, the coat color tends to become darker with age. 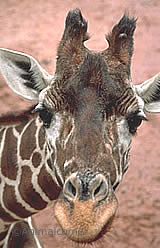 The heads of both male and female giraffes have a pair of hair-covered horns called ossicones, which are permanently covered by skin and ending in a tuft of black hair. Male giraffes use their horns to playfully fight with one another. The horns of male giraffes are larger than those of female giraffes, growing up to 25 centimetres (about 10 inches) long.

As male giraffes age, calcium deposits form on their skulls and other horn-like bumps develop. Giraffes can have up to three of these large bumps, two in the rear of the skull and one in the forehead region, so that it may look like they have five horns.

This characteristic which is found in no other mammal is linked to the fights that male giraffes stage to establish dominance for mating.

Their small horns on top of their heads are covered in hair and are quite often used in combat between males (bulls), particularly when conflicting for dominance over a mating partner. The horns on female giraffes are quite smaller and more tufty.

Giraffes have a small hump on their backs. Giraffes have a spotted pattern similar to that of a leopard. For a long time people called the giraffe a camel-leopard, because they believed that it was a combination of a camel and a leopard. This is where the giraffes species name comes from.

Giraffes long tongues, which measure about 18 – 20 inches long, act like a hand and allow the giraffes to grab hold of leaves and twigs and drag them into its mouth.

Just like cows and goats, the giraffe is also a ruminant animal which means they have a four part chamber stomach. Giraffes chew their food, but later regurgitate it, chew it again and then swallow it. It is only after the food has been swallowed for the second time that it passes through the four stomach chambers.

How Long is a Giraffe’s Neck?

A giraffe’s neck can measure over 1.5 metres (5 feet) in length, however, it contains only seven vertebrae the same number as in most other mammals, including humans.

Do Giraffe’s Have Horns?

The heads of both male and female giraffes have a pair of hair-covered horns called ossicones, which are permanently covered by skin and ending in a tuft of black hair.

What are Giraffe Horns Called?