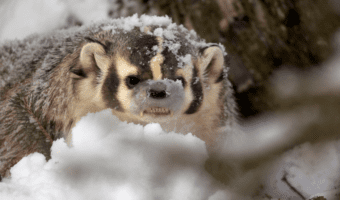 The American badger (Taxidea taxus) is a badger belonging to the Mustelidae family, a diverse family of carnivorous mammals that also includes weasels, otters, ferrets, and the wolverine. The American badger is similar in appearance to the European badger, although not closely related, and can be found in the western, central, and northeastern United States, northern Mexico, and south-central Canada to certain areas of southwestern British Columbia.

It belongs to the subfamily Taxidiinae, one of four subfamilies of mustelid badgers – the other three being the Melinae (four species in two genera, including the European badger), the Helictidinae (five species of ferret-badgers) and the Mellivorinae (the honey badger). The American badger’s genus is Taxidea.

American badgers generally resemble common badgers in terms of their appearance. They largely reside in open grasslands where there is a lot of prey for them to eat — animals such as mice, squirrels and groundhogs make up most of their diet.

The American badger is fairly common in its habitats and is not considered to be endangered. They are listed as Least Concern by the IUCN Red List. 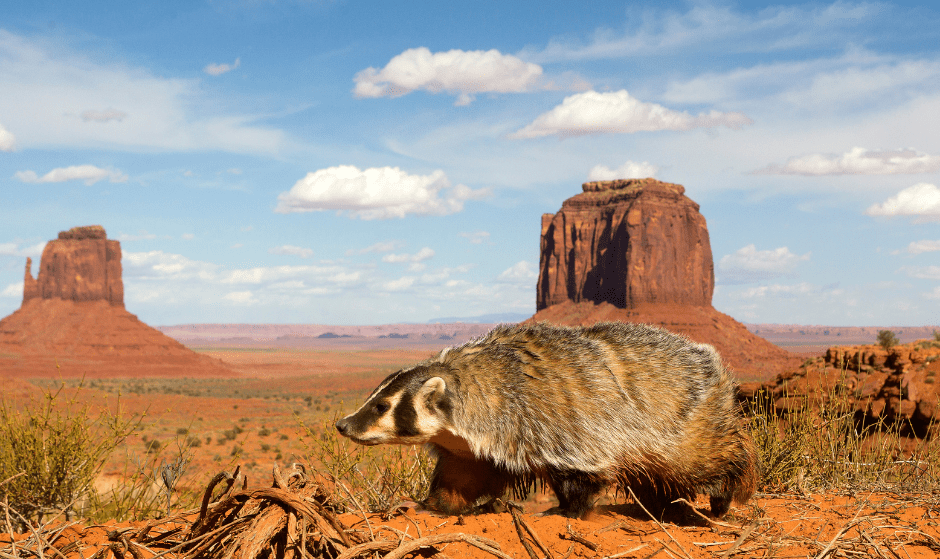 American badgers look very similar to common badgers. They measure 520 to 875 mm from head to tail, with the tail making up only 100 to 155 mm of this length. They weigh between 4 and 12 kg. In the fall, when food is plentiful, adult male badgers can reach up to 11.5 to 15 kg (25 to 33 lb). Males are generally larger than females. Their bodies and stocky and low-slung, and they have short, powerful legs with very long fore claws, which can measure up to 5 cm in length.

The American badger, like the common badger, has distinctive head markings with a black and white pattern, brown or blackish “badges” marking the cheeks and a white stripe extending from the nose to the base of the head. In northern populations, this stripe ends near the shoulders. In southern populations, however, it continues over the back to the rump.

These badgers have a grizzled, brown, black and white coat that is made up of coarse hair or fur. This coat allows them to camouflage in grassland habitat.

In the wild, badgers are estimated to live for between 4 and 10 years. However, they can live up to 14 years old. In captivity, they have lived up to 26 years.

Badgers do not stalk their prey, but instead prey by digging. They can dig very quickly, as their forelimbs allow them to power through soil and even harder surfaces such as concrete! They use their strength to tunnel after ground dwelling animals. They have also been known to store and hoard food.

Badgers are generally solitary animals that are active at night. They are fairly inactive in the winter months, and, although they do not hibernate, they spend much of the winter sleeping in their burrows. During this time they let their body temperatures fall to about 9 degrees Celsius and their heart beats at about half the normal rate.

American badgers have excellent vision, scent, and hearing, and it is also thought they have nerve endings in the foreclaws that may make them especially sensitive to touch in their forepaws. Little is known about how they communicate, but it is thought that they most likely use their scent to communicate. 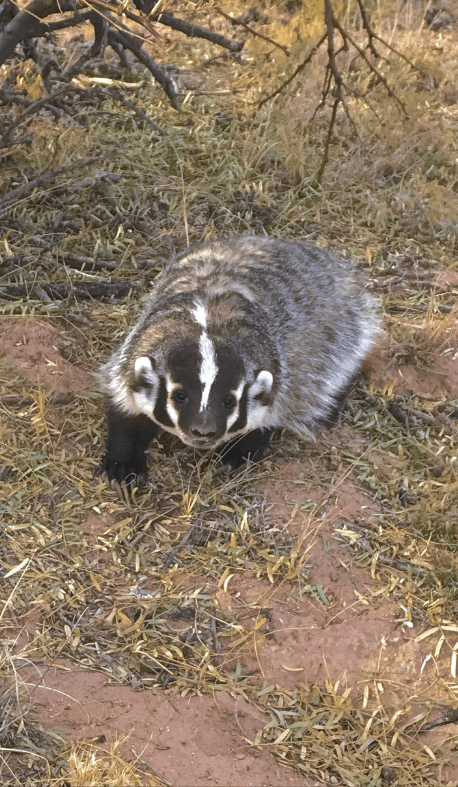 While badgers are solitary, they will seek out mates during the breeding season. During this time, in late summer and early fall, they will expand their range to find a mate. Males have larger home ranges that are likely to overlap with the home ranges of several females, and so may mate with more than one female.

After copulation, implantation is delayed until December or as late as February. After this period embryos implant into the uterine wall and resume development. While the gestation period of the badger is only 6 weeks, this actually means that the female badgers are pregnant for 7 months!

Female badgers give birth in grass-lined dens. They give birth to a litter size of between 1 and 5, but the average is 3. The badger young are born blind, with only a thin coat of fur, and their eyes only open at 4 to 6 weeks old. They are nursed by their mother until they are 2 to 3 months old, after which they are given solid food, both before and after they are weaned.

American badger young will emerge from the den at 5 to 6 weeks old and will stay with their mothers until they are 5 to 6 months old. While males are not sexually mature until the autumn of their second year, females are able to mate when they are 4 months old. Most female American badgers become pregnant for the first time after they are a year old.

American badgers are found in the Great Plains region of the United States and across western, and northeastern North America. They are also found through the central western Canadian provinces and south throughout the mountainous areas of Mexico. Since the turn of the 20th century, the badger range has expanded and they are now found as far east as Ontario, Canada.

Badgers prefer to live in dry, open grasslands, fields, and pastures. These areas give them good access to their prey. They may also be found in forest glades and meadows, marshes, brushy areas, hot deserts, and mountain meadows. They are sometimes found at elevations up to 12,000 feet (3,700 m) but are usually found in the Sonoran and Transition life zones (which are at elevations lower and warmer than those characterized by coniferous forests).

A badger’s home range can vary depending on the season, which can alter the amount of food available. Males generally have larger home ranges than females.

American badgers require cover for sleep, concealment, protection from weather, and natal denning. They typically enlarge foraged out gopher dens or other prey holes, or other animal burrows. Badger burrows range from about 4 feet to 10 feet in depth and 4 feet to 6 feet in width. A female American badger may create 2 to 4 burrows in proximity with a connecting tunnel for concealment and safety for her young.

In winter, a single den may be used for most of the season, but, in summer and fall, badgers range more frequently and may abandon their dens every week or so and find a new one. Natal dens are dug by the female and are used for extended periods, but litters may be moved, probably to allow the mother to forage in new areas close to the nursery. 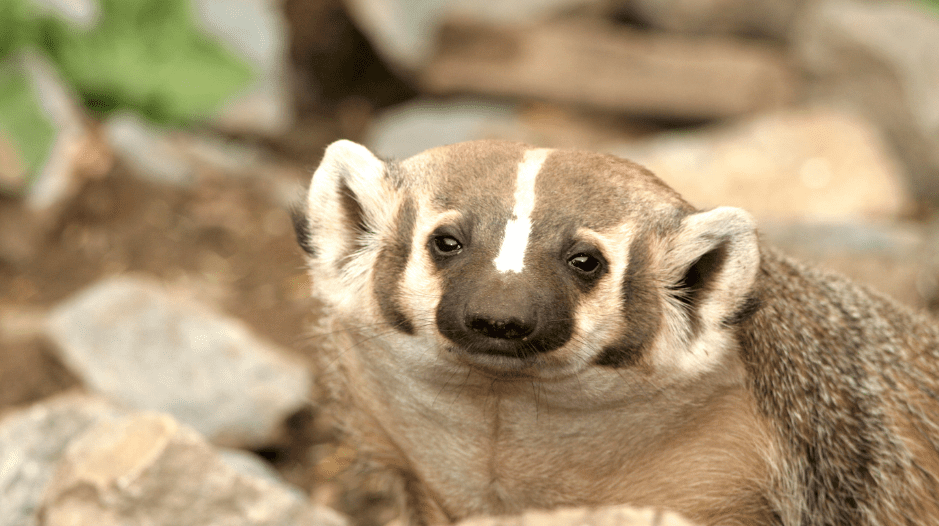 American badgers are not considered to be endangered as they are quite widespread across their range. They are listed as Least Concern by the IUCN.

Badgers are important consumers of many small prey items in their ecosystem. They help to control rodent populations, kill venomous snakes, and eat insects and carrion. Their burrows provide shelter for other species and their digging activity helps in soil development.

The main predators of badgers are humans. The American badger is hunted much more frequently by humans that it is by other animals. They are caught by humans for their pelts, which is used for brushes and painting brushes. In some parts of North America, including Michigan, Wisconsin, Illinois, and British Columbia, badgers are protected from hunting by law.

Predators of American badgers are uncommon, but golden eagles, bobcats, cougars and coyotes have been recorded to prey on these animals. Bears and grey wolves may also sometimes take badgers. However, badger young are much more likely to be taken than adult badgers.