You are here: Home / Animals / Groundhog 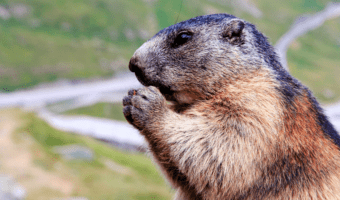 The groundhog (Marmota monax), also known as the woodchuck, belongs to the family Sciuridae and the genus marmots, which is made up of 15 species of large ground squirrels. The groundhog is found in North America, particularly in the Eastern United States, across Canada and into Alaska.

Groundhogs are different to other marmots in the fact that they are a lowland animal and do not live in rocky and mountainous areas. They are also very solitary which is unusual for the genus, and do not create long-term bonds with other individuals.

There are many other names the groundhog is known by. These include the chuck, wood-shock, groundpig, whistlepig, whistler, thickwood badger, Canada marmot, monax, moonack, weenusk, red monk and land beaver.

These animals are mostly herbivorous and eat alfalfa, clover and dandelion. The groundhog is very important in maintaining healthy soil in woodland and plain areas and is considered to be a crucial habitat engineer. Thanks to their abundance and large range, they are listed as Least Concern on the IUCN Red List.

Groundhogs may be raised in captivity, but their aggressive nature can pose problems. In the United States and Canada, the yearly February 2 Groundhog Day celebration has given the groundhog recognition and popularity, during which a groundhog is used for weather prediction and to gage how many weeks of winter are left. The groundhog and the ceremony also gained recognition from the 1993 film Groundhog Day, starring Bill Murray. 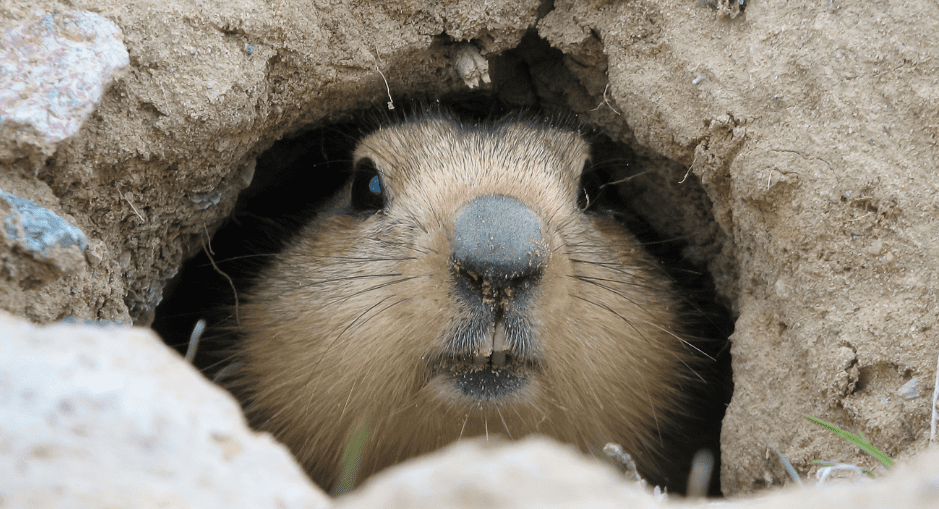 Groundhogs are stocky in appearance and often stand up on their hind legs, making them look tall. They have twenty-two white teeth, which is uncharacteristic of rodents, including four incisor teeth, which grow 1.5 millimetres (1⁄16 in) per week. Constant usage wears them down again by about that much each week. They also have rounded ears and powerful, short legs and broad, long claws that allow them to dig very well.

The groundhog has an average lifespan of between 2 to 6 years in the wild. Deaths are usually the result of predation or disease. In captivity, they can live for up to 10 years.

These hogs are mostly a herbivore and primarily eat wild grasses and other vegetation. This includes alfalfa, clover, dandelion, sheep sorrel, timothy-grass, buttercup, tearthumb, agrimony, and buckwheat. They also eat berries and agricultural crops, such as red and black raspberries, mulberries, plantain and wild lettuce.

They also eat small animals on occasion, such as grubs, grasshoppers, snails, and even baby birds. However, they are not as omnivorous as many other members of Sciuridae.

These animals eat more than a pound of vegetation daily. They are a hibernating species and, instead of storing food, they stuff themselves to survive the winter without eating. In early June, their metabolism slows and their weight increases by as much as 100%.

They do not drink water, and get all their liquid from the juices of food-plants.

Groundhogs are diurnal and their feeding activity is highest during morning and afternoon. They usually forage in sessions of 2 hours. 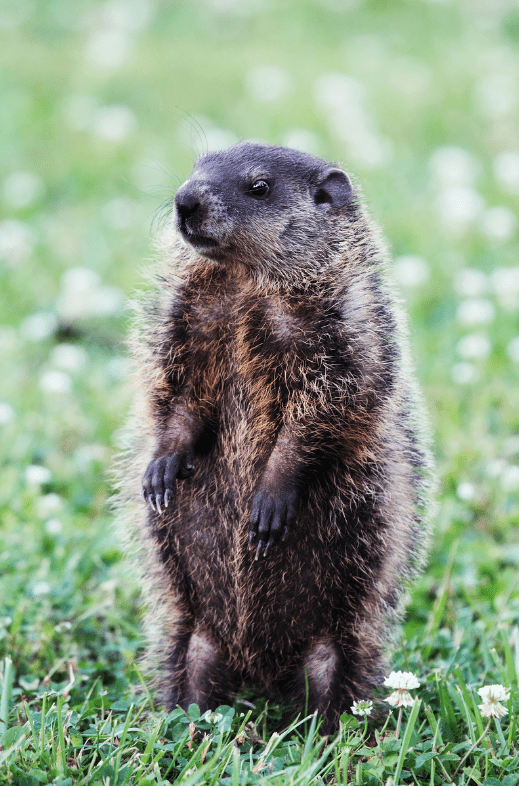 Groundhogs are diurnal and are active during the day. They are always alert when not in their burrow, and are often seen standing erect on their hind feet watching for danger. They will use a high-pitched whistle to warn the rest of the colony when there is danger, even though they are not very social animals.

The groundhog is territorial and primarily solitary, although will sometimes greet each other nose to nose. They can communicate with other vocalizations such as low barks, and also use their scent glands.

Groundhogs enter into true hibernation and are one of the few species to do so. They will often build a separate “winter burrow” for this purpose. They hibernate from October to early spring, around March or April, in most areas, although in warmer areas will hibernate as little as three months. Some fellow hibernators, such as rabbits, opossums, raccoons and skunks, will move in with groundhogs for the winter, hibernating in one of the rooms in their burrow network.

When they enter into hibernation, their body temperature drops to as low as 35 degrees Fahrenheit, their heart rate falls to 4–10 beats per minute and their breathing rate falls to one breath every six minutes. Males emerge from hibernation before females.

Groundhogs mate soon after emerging from hibernation. Females are monoestrous and mating occurs only during the spring. Males emerge from hibernation first so they can establish territories, dominance hierarchies, and search for mates. Groundhogs are polygynous, with males having multiple mates per season.

The gestation period is between 31 to 32 days and the litter size is usually between 3 and 5 pups, although it can be as many as 9. The groundhog pups weigh between 26 and 27 grams at birth and become independent very quickly and leave the mother around age 2 months old.

The groundhog become sexually mature by the age of 2, although some can reproduce at the age of 1.

Burrows are used for safety, protection, mating, sleeping and raising young. The den is lined with dead leaves and dried grasses and it usually has two openings or holes — one for entering and one used as a spy hole. 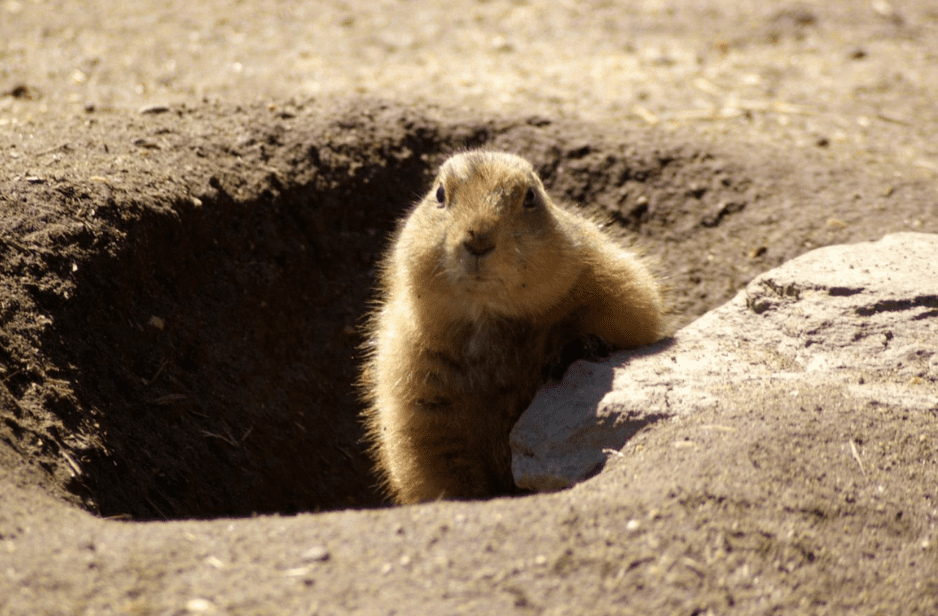 Groundhogs are common throughout their range and are therefore listed as Least Concern on the IUCN Red List.

Both their diet and their habit of burrowing make them serious nuisance animals around farms and gardens. They will eat many commonly grown vegetables, and their burrows can also destroy foundations. In some areas, groundhogs are game animals and are killed regularly for sport, food, or fur.

The main predators of groundhogs are coyotes, badgers, bobcats and foxes. These predators are successful stealth stalkers so can catch groundhogs by surprise. The groundhog can also be hunted by golden eagles and great horned owls.

Young groundhogs, less than a couple of months in age, can be eaten by American mink, hawks and rattlesnakes.

Groundhogs escape predators by retreating into their burrows. They also use their large claws and incisors to fight off any predators. They can also climb trees to help escape any threats.