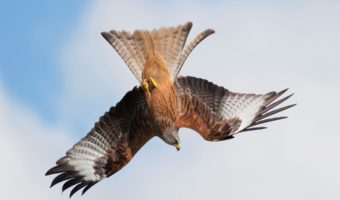 The Red Kite bird (Milvus milvus) is a medium to large bird of prey which also includes many other diurnal raptors such as eagles, buzzards and harriers. The Red Kite is endemic to the Western Palearctic region. It is a rare species which is resident in the milder parts of its range, however, birds from northern and central Europe winter further south and west. 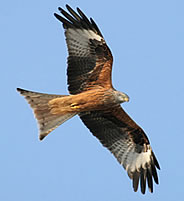 The Red Kite bird is an elegant bird which soars with long wings held at a dihedral (upward angle from horizontal in a fixed-wing aircraft or bird wing from root to tip), and long forked tail twisting as it changes direction. Their body, upper tail and wing coverts are tinged with red. The white primary flight feathers contrast with the black wing tips and dark secondary feathers. Male and female are similar, however, juveniles have a brownish yellow breast and belly.

The Red Kite bird call is a thin piping, similar to but less mewling than the Common Buzzard. At signs of danger, a mother Red Kite will signal the young who will ‘play dead’ to the extent that a fox will believe them to be dead and leave them, thinking it can return to eat them later.

Adult Red Kite birds differ from juvenile Red Kite birds in a number of characteristics: Adults are overall more deeply brownish red, compared with the more washed out color of juveniles. Adults have black breast-streaks whereas on juveniles these are pale. Juveniles have a less deeply-forked tail, with a dark sub terminal band. Juveniles have pale tips to all of the greater-coverts (secondary and primary) on both the upper and under wings, forming a long narrow pale line; adults have pale fringes to upperwing secondary-coverts only. These differences hold throughout most of the first year of a birds life.

In the United Kingdom, the breeding population eventually became restricted to a handful of pairs in Wales. However, recently, the Welsh population has been supplemented by re-introductions in England and Scotland. In a second stage of reintroduction in 1995 and 1996, further birds were brought over from Germany to populate the areas of Dumfries and Galloway and the Derwent Valley.

One of the best places to see Red Kite birds in the UK is Gigrin Farm near Rhayader, Mid Wales, where hundreds are fed by the local farmer as a tourist attraction.

According to a report by the Welsh Kite Trust, the UK is the only country in which the red kite population is increasing.

More birds that start with K