You are here: Home / Animals / Hedgehog 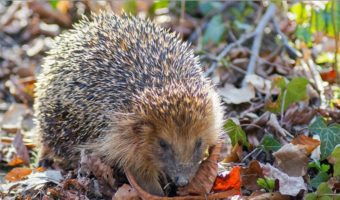 Hedgehogs are native to mainland Britain and are also found throughout northern and western Europe. Related and similar species are also found as far as north Africa, the Middle East and central Asia. There are 16 species of hedgehog in five genera, found through parts of Europe, Asia, Africa and New Zealand.

There are no hedgehogs native to Australia and no living species native to North America. Those in New Zealand are introduced.

The pre-breeding season population estimate of Hedgehogs in Britain is around 1,555,000. Many die from eating poisoned slugs.

Hedgehogs are easily recognized by their spines, which are hollow hairs made stiff with keratin. Their spines are not poisonous or barbed and unlike the quills of a porcupine, cannot easily be removed from the animal. 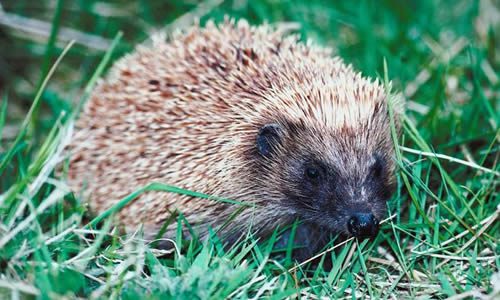 However, spines normally come out when a hedgehog sheds baby spines and replaces them with adult spines. This is called ‘quilling’.

When under extreme stress or during sickness, a hedgehog can also lose its spines. Their under-parts are covered by coarse grey-brown fur, forming long skirts along flanks. A hedgehog measures around 23 centimetres in length and has a 4 centimetre tail. They can weigh up to 2 kilograms. The Hedgehog has a powerful forefoot and claws for digging.

Hedgehogs have 5 toes on their front paws with short nails. However, on their back paws they have 4 toes with long, constantly growing nails. They have these characteristics because hedgehogs burrow. They can also climb, swim and can sprint a surprisingly fast 6 miles per hour.

Hedgehogs build nests of moss and leaves under vegetation around parks, gardens and farmland. They prefer woodland edges, hedgerows and suburban gardens where food is plentiful.

Hedgehogs are not exclusively insectivores but are almost omnivorous. Hedgehogs feed on insects, snails, frogs and toads, caterpillars, worms, beetles, snakes, bird eggs, carrion, mushrooms, grass roots, berries, melons and watermelons. Its favourite food is slugs and worms, they may eat 40 or more slugs a night.

Hedgehogs have changed little over the last 15 million years. Like many of the first mammals they have adapted to a nocturnal way of life.

Hedgehogs hibernate alone from November to April under a supporting structure such as a shed, wood piles, brambles, open compost bags or bonfire heaps. They may, however, emerge to forage at night during warm winter spells. In summer, hedgehogs shelter during the day in temporary nests of leaves, moss and grass. By autumn, hedgehogs have dramatically put on weight in preparation for their hibernation. They hibernate until the following March or April, during which time their body temperature and heart beat fall dramatically, from 190 to about 20 beats per minute. Most hedgehog deaths occur during this hibernation period.

If threatened, Hedgehogs can roll up into a ball as protection against predators. Their biggest enemy apart from man is the badger. The roll causes all spines to point outwards. However, its effectiveness depends on the number of spines and since some of the desert hedgehogs evolved to carry less weight, they are much more likely to try to run away and sometimes even attack the intruder, trying to ram into the intruder with its spines, leaving rolling as a last resort. This results in a different number of predators for different species. Smaller species like the Long-eared Hedgehog are preyed on by foxes, wolves and mongooses.

All hedgehogs are primarily nocturnal, although different species can be more or less likely to come out in the daytime. The hedgehog sleeps for a large portion of the daytime either under cover of bush, grass, rock or in a hole in the ground. Again, different species can have slightly different habits, however, in general, hedgehogs dig out dens for shelter. All wild hedgehogs can hibernate, although not all do. Hibernation depends on temperature, species and abundance of food.

Hedgehogs occasionally perform a ritual called ‘anointing’. When the animal comes across a new scent, it will lick and bite the source and then form a scented froth in its mouth and paste it on its spines with its tongue. It is not known what the specific purpose of this ritual is, however, some experts believe anointing camouflages the hedgehog with the new scent of the area and provides a possible poison or source of infection to any predator that gets poked by their spines. Anointing is sometimes also called ‘anting’ because of a similar behaviour in birds.

Hedgehogs are a powerful form of pest control. A single hedgehog can keep an average garden free of pests by eating up to 200 grams of insects each night. It is common throughout the United Kingdom to see people attempting to lure hedgehogs into their gardens with treats and hedgehog-sized holes in their fences.

The hedgehogs dilemma is based upon the apparent danger of a male hedgehog being injured from a spine while mating with a female hedgehog. However, this is not an issue for hedgehogs as the males penis is very near the centre of its abdomen (often mistaken for a belly button) and the female has the ability to curl her tail upward to the point that her vulva protrudes behind the rest of her body. As such, the male does not have to get completely on top of the female when mating.

Depending on the species, the gestation period is 35 – 58 days. The average litter is 4 – 7 newborns for larger species of hedgehog and 5 – 6 for smaller ones. The pale-coloured soft spines appear hours after birth and take 3 weeks to harden. Hedgehogs are born blind. Many believe that they are born without quills, which develop in the following days. However, the quills are easily visible within hours of birth after the newborn hedgehog has been cleaned. Young Hedgehogs become independent of mother at 4 – 6 weeks. As with many animals, it is not unusual for an adult male hedgehog to kill newborn males.

Hedgehogs have a relatively long life span for their size. Larger species of hedgehogs live 4 – 7 years in the wild (some have been recorded up to 16 years), and smaller species live 2 – 4 years (4 – 7 in captivity), compared to a mouse at 2 years and a large rat at 3 – 5 years. Lack of predators and controlled diet contribute to a longer life span in captivity.

Hedgehogs are protected under the Wildlife and Countryside Act in Britain and may not be trapped without a licence. They are not considered to be endangered, although numbers are in decline due to habitat loss.

Hedgehogs are often killed by manmade influences, such as in ponds, bonfires, on roads, by strimmers and lawnmowers, pesticides, garden netting and litter. They are also killed by foxes, pine martens, stoats and badgers.

Provide a home for Hedgehogs

You can make a hedgehog house very simply. Covering a sturdy upturned crate with stones, earth or wood may be enough to encourage habitation. Leave a way for the hedgehogs to get in and out. You can also make or buy specially designed wooden hedgehog boxes. Check that the wood you use or buy is from a sustainable source. 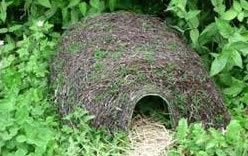 Make sure that your hedgehog box is sturdy, as both badgers and foxes prey on hedgehogs. Of course, the easiest way to house a hedgehog does not involve much effort on your part at all. Help them make their own homes by creating hedgehog-friendly sites around the garden. Accessible space under a shed or hedge, log piles and compost heaps are all favourites.

Site the house in a quiet area of the garden, against a wall, bank or fence if possible and under or near plant cover. Make sure that the entrance is not facing north or north-east for a higher chance of habitation.

Do not line the box. Hedgehogs make their own nests out of leaves and other garden debris. Do not disturb the box once it is occupied, as you may frighten a nesting mother and cause the young to be abandoned. Like slugs and snails, hedgehogs are often found in damp, grassy areas of the garden. If you have, or can create, an untidy area near your nest box site, hedgehogs will be able to forage more easily and with protective cover.

Always check compost heaps and piles of firewood for hedgehogs before disturbing them, as they may well nest in these. Fruit nets and mesh can be dangerous for hedgehogs (and other animals) which may get caught in them.

Lawn mowers and strimmers can be fatal. Be especially careful when cutting longer grass. Avoid using slug pellets and other garden chemicals. These can harm hedgehogs. It is better to encourage hedgehogs to keep these pests under control. As hedgehogs have a fairly large territory, they may use a number of different gardens to search for food, if you want to encourage them they will need to be able to get into and out of yours.