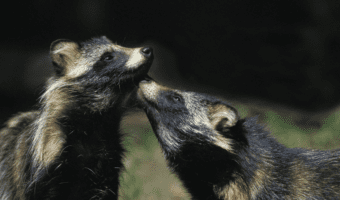 This species belongs to the family Canidae and the order Carnivora. They are omnivores, feeding on a wide range of animals as well as fruits, nuts and berries. The raccoon dog prefers forest, forest borders, or dense vegetation as its habitat.

It is not an endangered species and is listed as Least Concern by the IUCN Red List. However, they are often hunted, particularly for their fur which is used to make a wide range of clothing. In fact, due to the fur trade, this species has been widely introduced in Europe, where it has been treated as a potentially hazardous invasive species. 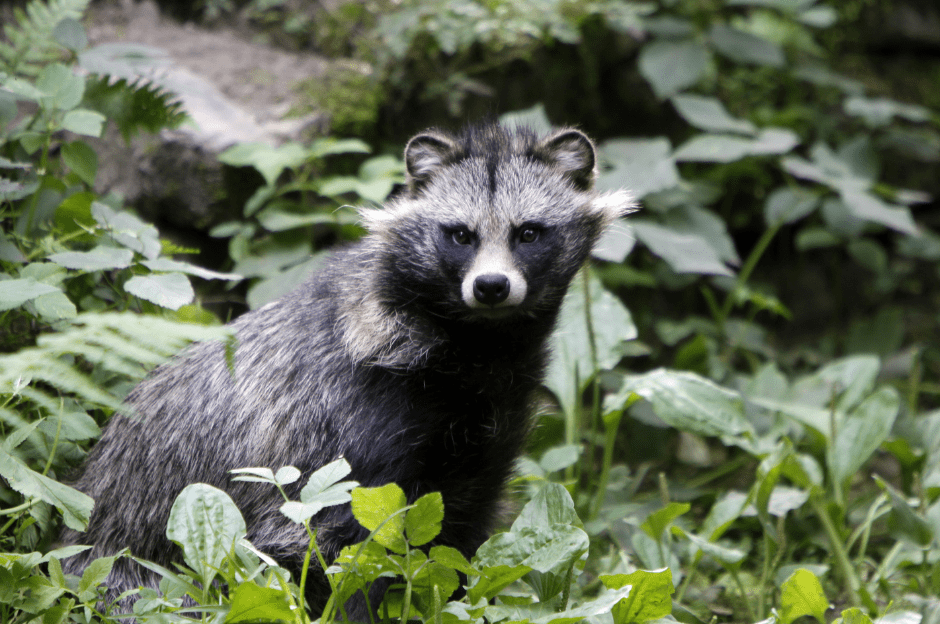 Raccoon dogs have a similar appearance to a small fox, with a length that ranges between 50 to 68 cm from head to rump and a tail length of 13 to 25 cm. Their height ranges from 38.1 to 50.8 cm. They have a stocky body and short legs, with small heads that are sturdily built and moderately elongated (around 133 mm long). Their body weight ranges from 4 to 6 kg in the summer to 6 to 10 kg in the winter before hibernation, with individuals in Europe usually larger than those in China and Japan.

These animals have fur markings similar to those of raccoons, with a white muzzle, white face, and black fur surrounding the eyes. A black marking runs across both shoulders and down the back, forming the shape of a cross. Their base color is dirty, earth-brown, or brownish-grey with black guard hairs. The abdomen is yellowish-brown, while the chest is dark brown or blackish.

Their winter fur is long and thick with dense underfur and coarse guard hairs measuring 120 mm in length. The winter fur protects raccoon dogs from low temperatures ranging down to −20° to −25 °C. In the summer, they have brighter and reddish straw-colored fur. A rare, white color type occurs in China.

The raccoon dog has short and rounded ears that protrude only slightly from the fur. They also have small and weak canines and carnassials, flat molars, and relatively long intestines, which all reflect their omnivorous diets.

They have poor eyesight but an excellent sense of smell. This helps them to find prey, especially when hunting at night.

The raccoon dog has an average lifespan of between 6 and 11 years, with 6 to 7 years being the average. 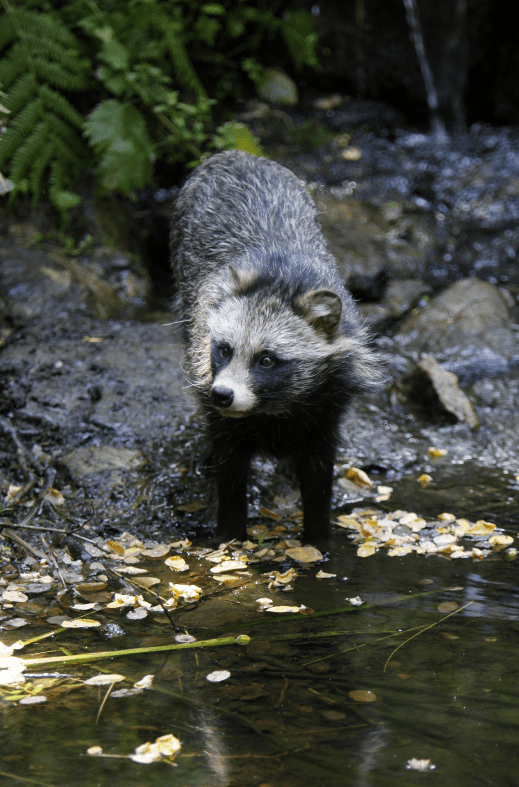 The raccoon dog is an omnivore that feeds on insects, rodents, amphibians, birds, fish, reptiles, mollusks, carrion, and insectivores, as well as fruits, nuts, and berries. Animals such as voles, gerbils, frogs and game birds are most commonly eaten. The raccoon dog can swim, so it can catch water dwelling animals easily, and will scoop prey out of the water using its paws near lakes, rivers, and streams. On the seashore, crabs, sea urchins, and sea carrion are also consumed

The raccoon dog will adapt their diet to the season. During the fall, they eat mainly vegetables, including a variety of fruits, wild berries, and seeds such as oats. In the winter, when food sources are limited, they may survive on human garbage and carrion.

These animals rely on their sense of smell to forage for food because their eyesight is very poor. They forage on the ground or on low vegetation, and keep their noses low to the ground. They are not fast animals, but they are relentless in their search for food. They are typified as collectors or gatherers.

Raccoon dogs live and hunt in pairs or small family groups, but it is unknown whether they remain in the pairs in which they breed for life. Social grooming is important in raccoon dogs.

They were originally thought to be nocturnal animals, but recent research has shown they may be active eat any time of the day or night. This is usually linked to the need for food.

The raccoon dog hibernates from November and may extend through early April, depending on the local climate. These animals hibernate in pairs and are the only canids known to hibernate. They find an abandoned burrow created by a badger or another animal and use this for the hibernation period.

Hibernation is not absolutely necessary for this species and some individuals may not hibernate at all. They must gain as much as 50% of their body weight before hibernation, otherwise they will have to emerge from the den on warm winter days to forage. If the weather is warm enough where they reside, such as in the southernmost part of the range, the raccoon dog won’t hibernate.

Raccoon dogs use latrines to communicate with other members of the species. A latrine is a definite site where an entire group of raccoon dogs will both urinate and defecate. They use these areas to not only communicate with family members, but also strangers.

They are also vocal canids, although they do not bark. These animals whine, whimper, or mew and is usually a sign of friendly behavior. When being aggressive or if they are frightened, they may growl.

Raccoon dogs breed at the end of the cold part of winter in January, February, or March, depending on geographic location, with females coming into heat once a year, after hibernation. Estrus lasts from 3 to 5 days and females release a scent to signal they are ready to mate.

It is unknown whether raccoon dogs breed with the same partner year after year, although it is thought they are most likely monogamous in the wild. Polygamy has been reported in captive individuals though.

Females are courted by 3 to 4 males during the mating season, but there is little fighting between males for mates. Pairs form strong bonds before mating and remain together until after their offspring have become independent. Both the males and females help to raise their pups.

Males will bring the female food during her late pregnancy and, once the babies are weaned, the male typically watches over them while the female hunts for food. The male may also hunt while the female watches the young.

The gestation period for the raccoon dog is between 59 and 64 days, after which 5 to 7 pups are born. Females give birth in dense vegetation or in burrows that have been abandoned by foxes or badgers.

The pups are born blind and have soft, black fur, usually weighing between 60 to 115 g. They open their eyes at 9 or 10 days old and have teeth by around day 14 to 16. They are weaned between 30 and 40 days old. At 4 months, the pups begin learning how to hunt by watching their parents and by the time they are four and a half months old, they are ready to live on their own. The raccoon dog pups reach full size at 80 to 85 days of age and reach sexual maturity between 9 to 11 months. 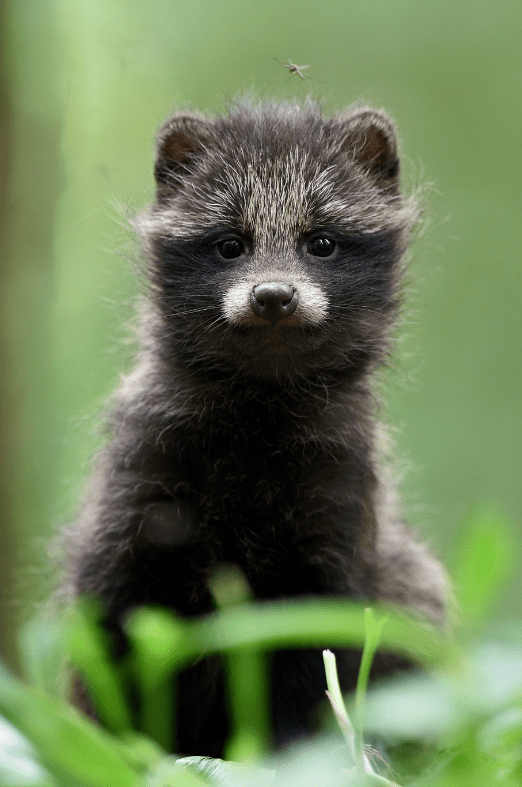 The raccoon dog is native to eastern Siberia, northern China, North Vietnam, Korea, and Japan. However, between 1927 and 1957, the fur-farming industry introduced from 4,000 to 9,000 raccoon dogs to the European and Asian U.S.S.R. Therefore, today, this raccoon dog is found across northern and western Europe in countries including Finland, Sweden, Norway, Poland, Romania, Czech Republic, Slovakia, Germany, France, Austria, and Hungary.

They are found in both subarctic and subtropical climates and prefer forest, forest borders, or dense vegetation. These animals can also be found in regions bordering water, and altitudes greater than 3,000 m all the way down to sea level. They can also be found in human habitats if they are looking for food.

The raccoon dog lives in burrows in areas of thick vegetation where they can hide and blend in with their environment. When food becomes scarce in their habitat, they will migrate to find a new territory where prey is more plentiful. They are adaptable and can move long distances to find a food source.

Raccoon dogs are not considered to be an endangered animal and are listed as Least Concern on the IUCN Red List. Their total population is unknown.

While they do have natural predators, they are killed mostly by humans. They are typically hunted from November until the snow deepens. In the Far East, they are hunted at night using Laikas and mongrels. They are also caught in traps set by poachers. Their fur is used on clothing and is often called “murmansky” or “tanuki” fur. In the United States, it is marketed as “Asiatic raccoon”, and in Northern Europe as “Finn raccoon”.

Pelts are used for necklets, collars, and fur coats. Small raccoon dog pelts with silky fur command higher prices than large, coarse-furred ones. Due to their long and coarse guard hairs and their woolly fur fibre, which has a tendency to felt or mat, raccoon dog pelts are used almost exclusively for fur trimmings.

In Japan, people eat raccoon dogs as well as use their fur for bristles for calligraphy brushes. The bones have also been used medicinally and as an aphrodisiac. The natives also employed raccoon dog skin to make bellows, to decorate their drums, and for winter headgear.

These animals are also bred in captivity for their fur. For example, twenty percent of domestically produced fur in Russia is from the raccoon dog.

Raccoon dogs can cause harm to the ecosystem and human lifestyles. They to game bird populations, particularly in floodlands and the shorelines of estuaries, where they feed almost exclusively on eggs and chicks during the spring period. They are also harmful to the muskrat trade, destroying their nests and eating their young. In Ukraine, raccoon dogs are harmful to kitchen gardens, melon cultivations, vineyards, and corn seedlings.

It can be considered a pest for these reasons, and can also transmit disease to pets and even humans. They are sometimes poisoned or shot if they enter these environments. They can be killed while trying to cross roads in busy areas as well.

Raccoon dogs have a few natural predators, including wolves, wolverines, lynx, golden eagles, sea eagles, eagle owls, martens and even domestic dogs. They use their teeth and claws to protect themselves but are often much smaller than their predator and therefore cannot escape.

This animal’s brown coat allows it to blend in with its environment as a protection against predators. These mammals can also swim and climb trees to escape threats. The ability to climb trees is a characteristic they share with one other animal from the Canidae family, namely the gray fox.