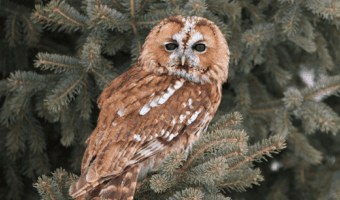 The Tawny Owl (Strix aluco) – also known as the Brown Owl – is a nocturnal bird of prey that belongs to the Strigidae family. It has a distinctive reddish-brown colouring, hence its name, and is one of the most commonly seen owls in Europe and much of Asia.

The Tawny Owl is closely related to Hume’s Owl, the Ural Owl and the North American Barred owl. These species are all within the same genus ‘Strix‘.

These medium sized birds are around the same size as a wood pigeon, but can be very territorial. They are incredibly vocal with a distinctive call and are often heard before they are seen. In many parts of its range, the tawny owl is a symbol of good luck.

The tawny owl is recognisable by its large, yellow eyes and facial disc. It has a rounded head, short neck, long wings, and a broad tail. There are two different color types or ‘morphs‘ for this owl, brown and grey. Those with more brown coloring are most common in the western and southern part of the range across Asia, western Europe and the UK. Those with a grey dominant coat are predominantly toward the eastern and northern parts of the range, particularly in Scandinavia and Siberia.

Whether grey or brown, all tawny owls have a pale belly, with dark streaks. As well as the different colors, there are actually 7 different subspecies of Tawny owl currently recognised across the range. These are broken down as follows:

Some owls that were once considered to be subspecies of tawny owl have since been reclassified. Historically, there have been between 10 and 15 subspecies classified as tawnys.

While any subspecies can be brown or grey, the color is hereditary. The brown coat is more common in owls that live in the southern part of the range, and grey is more common in the north. The grey coat is the more dominant of the two and survival and breeding rates of the grey tawny is more successful than the brown.

Tawny Owls size, sets it apart from many of the other owls with which it shares its range. It is a similar shape to the great grey owl, Eurasian eagle-owl and Ural owl, but much smaller in size.

Tawny Owls are the most common owl in the UK, where they are the species responsible for the notorious ‘tu-whit tu-who‘ owl call that people – especially in rural and suburban settings – are all too familiar with hearing through the night. While common in the UK, these non-migratory owls are completely absent from Ireland and it is commonly believed this is due to competition from the larger long-eared owl.

They are very common not just in the UK, but throughout Europe and Asia from the Iberian Peninsula to Siberia, down to the Himalayas and toward north Africa. There are even some small populations as far south as the Canary Islands.

Tawny owls prefer wooded habitats, especially areas with large trees but plentiful open ground, and access to water. They are most often found in deciduous and coniferous woodland, parkland, orchards and gardens. In the UK these birds also occasionally occupy urban parks and gardens where there are plenty of tall tree branches to nest on. They may even use artificial nest boxes if available. They tend to stay away from areas with loud background noise though.

Tawny owls primarily feed on small mammals such as voles, rabbits and mice, but they also take a variety of birds, insects and amphibians, including frogs and fish. In urban areas, birds are known to make up a larger proportion of their diet, whereas in rural areas they may feast on more abundant beetles and earthworms too. These nocturnal hunters find their prey from perches or by flying low over suitable habitat, pouncing on their prey when an opportunity arises. They will eat their prey whole, and regurgitate anything undigestible a few hours later.

These owls are nocturnal predators, usually found snoozing in their nests during the daylight hours. Despite being nocturnal by nature, their eyes are actually no more sensitive or ‘useful’ than the human eye when it comes to night vision.

Come springtime, males can be spotted hunting even during daylight hours to gather food for their nesting partners.

You are most likely to hear a tawny owl in the colder months over Autumn and Winter, particularly at night when they are at their most vocal. Their recognizable calls are not just for fun, but to for a variety of reasons such as attracting a mate, or marking territory which they will defend aggressively if needs be, especially around their nest during breeding season.

During the Autumn they are establishing their range and this is when they are at their most vocal. Males are known to make loud repetitive calls during mating season too in order to attract a mate. During this time, the male’s call can be heard up to 2 km away.

These owls can be so defensive that they are actually known to cause more injuries to humans than any other bird across Europe.

Tawny Owls are not particular when it comes to their nesting sites. If they can find a tree cavity, that’s usually the preferred option; yet, in the absence of such an ideal location, these owls will quickly adapt and nest in other natural spots like old magpie or crow nests. Even abandoned pigeon nests.

Breeding usually takes place early in the year and once per year. Females will lay their eggs (usually three to five) on the floor of the nesting territory, usually between February and March. The eggs are incubated for about 28-32 days, after which time the chicks hatch and begin to grow rapidly. When the chicks reach maturity at around 5 -12 weeks old (depending on location), they will then fledge and disperse from their natal nests.

Breeding pairs are non migratory and will stay usually within their home range, unless tragedy or exceptional circumstance – such as deforestation or human encroachment for example, forces them out.

Tawny owls reach sexual maturity around one year of age and at that time they usually pair off into monogamous couples for life. The oldest known tawny owl was recorded in the wild through ringing at over 23 years old, but normally they live for around 4-5 years.

Parent tawny owls will fiercely protect their young from potential threats such as other raptors and larger predators that may seek out an easy meal. They are not always successful though and there are a few predators that will take the risk of a nest raid.

The predators of tawny owls include various species of raptors, as well as small mammals such as cats and foxes. The biggest threats are large birds of prey such as Eurasian Eagle owls and Goshawks. Other predators include weasels, pine martens and other opportunistic animals that are capable of climbing high enough to reach the owl’s nest.

With populations believed to be well over 1 million individuals across their range of the species, these owls are not considered to be threatened at all. As such, they are categorised as ‘Least Concern’ on the IUCN Red List. They are listed in Appendix II of the Convention on International Trade in Endangered Species (CITES) meaning that trade of these owls, dead or alive is regulated.