Galapagos consists of 13 main islands, 6 smaller islands and 107 rocks and 42 islets which cover a total area of 7,850 kilometres squared. The islands are located at the Galapagos hotspot, a place where the earths crust is being melted from below by a mantle plume, creating volcanoes. The oldest island is thought to have formed between 5 and 10 million years ago. The youngest islands, Isabela and Fernandina, are still being formed, with the most recent volcanic eruption in 2007.

The Galapagos Archipelago is located on both sides of the equatorial line approximately 970 km(600 miles) west from continental Ecuador. Local time is -6 GMT.

The largest island is Isabela, with a total area of 4,590 kilometres squared which presents the highest point of the archipelago, Volcano Wolf, 1,690 metres. 97% of the total area of the isles belongs to the Galapagos National Park, the rest belongs to inhabited and developed areas like the island of Santa Cruz, San Cristobal, Isabela and Floreana, in addition to Baltra, an island occupied by the Ecuadorian Armed forces. 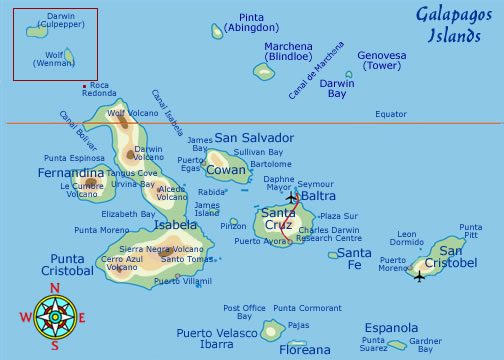 The Galapagos Isles were actually ‘born’ in the Pacific Ocean. They were formed by volcanoes that ‘bubbled’ up out of the ocean. When they reached the ocean surface, they dispersed and other little islands emerged from more under the sea volcano eruptions.

At first, these islands were hot, molten rock. They eventually cooled and became rocky islands. Some of these islands are still forming. In the not so distant past, a volcano erupted and the lava rolled down the side of the mountain and settled. This increased the size of the islands.

Most of the islands have not had eruptions for many, many years and vulcanologists (scientists who study volcanoes) say that the safer islands, particularly ones that attract many tourists will never have active volcanoes on them again.

Below is a list of the main Galapagos islands in alphabetical order: