The island Isabela was named in honour of Queen Isabela of Spain who sponsored the voyage of Columbus. With an area of 4,640 square kilometres (1,792 square miles), it is the largest island of the Galápagos and occupies about 60% of all the land area of Galápagos. Its highest point is Wolf Volcano with an altitude of 1,707 metres (5,600 feet) the highest peak on all of Galápagos. The Equator passes directly through the island.

The island is shaped like a seahorse resulting from the merging of six large volcanoes into a single landmass (volcanoes Cerro Azul, Sierra Negra (Santa Tomás), Alcedo, Darwind, Wolf and Ecuador). All except Volcán Ecuador, which is older, are still active today.

On this island Galapagos Penguins, Flightless Cormorants, Marine Iguanas, Booby Birds, Pelicans and Sally Lightfoot crabs are found. At the skirts and calderas of the volcanos of Isabela, Land Iguanas and Galapagos Tortoises can be observed, as well as Darwin’s Finches, Galapagos Hawks, Galapagos Doves and very interesting lowland vegetation. The third-largest human settlement of the archipelago, Puerto Villamil, is located at the south-eastern tip of the island. It has about 3,000 inhabitants and has a small airport.

Although Isabela have several visitors sites, not many tourists actually visit here. Only long cruises on larger boats tend to visit the west coast. 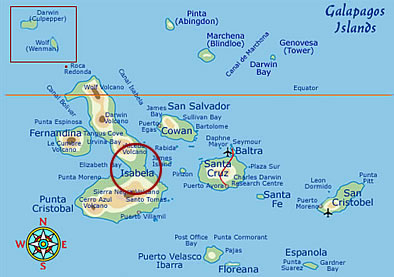 The area of Puerto Villamil has beautiful beaches and is a favourite place for birdwatchers. Flamingos can be seen here as well as about twenty different kinds of wading birds. This area is also home to Short-eared owls, Finches, Flycatchers and Galapagos hawks.

On the southern west coast, Punta Morena is situated. On the rocky shores you can usually see penguins and a great variety of shore birds.

On the Mariela Islas, you can often encounter Galapagos penguins. This bay is known for its variety of undersea life. Snorkelers encounter marine turtles and rays. The coastline is covered with mangroves that are home to seabirds and herons.

Urbina Bay, located at the base of Volcán Alcedo is a good site to see Flightless Cormorants, Marine Iguanas and Pelicans.

The only landing site on the eastern side of Isabela is Punta García. It is the starting point for a hike up to Volcán Alcedo. The caldera of the volcano is famous for its great number of endemic sub-species of giant tortoise and the steaming fumaroles.