Santa Fe Island, also called Barrington Island is named after a city in Spain. It is a small island of 24 kilometres squared which lies in the centre of the Galapagos archipelago, to the south west of Santa Cruz Island. Geologically it is one of the oldest, since volcanic rocks of about 4 million years old have been found. However, Santa Fe was formed from an uplift (rather than a volcano) giving the island a relatively flat surface rather than the typical conical shape of the other islands.

The vegetation of the island is characterized by the presence of a dense forest of the largest species of the giant Opuntia cactus. 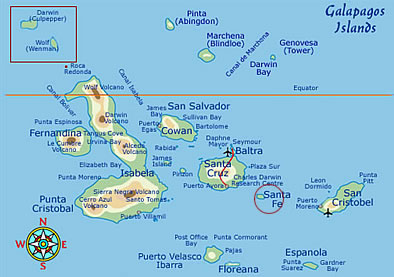 Goats were eradicated in 1971 and Santa Fe is home to a number of endemic species, which have bounced back from the threat of extinction. They include the Galapagos Hawk, Galapagos Snake, Rice Rats, a variety of Finches and the Galapagos Mockingbird.

Santa Fe Island is home to one of the most beautiful coves in all the Galapagos.

The visitor site is a wet landing located in Barrington Bay on the northeastern side of the island. Large numbers of sea lions are found on the beaches in the bay, occasionally hindering peregrination to the two trails leading from the beach.