Rabida Island has also been know as Jervis Island named in honour of the 18th century British admiral John Jervis. In Ecuador it is official known as Isla Rabida. It bears the name of the convent of Rabida where Columbus left his son during his voyage to the Americas. Rabida Island has an area of 4.9 square kilometres (1.9 square miles) and a maximum altitude of 367 metres (1,204 feet).

Located south of Santiago, Rabida is one of the most volcanically varied islands in the chain. Geologically consisting of eroded hills and lava emitted from spatter cones that have resulted in islands striking colors.

White-Cheeked Pintail Ducks live in a salt-water lagoon close to the beach. On the cliffs Blue Footed and Masked booby birds build their nests. Marine Iguanas and Sea Lions are often seen resting in the shade of the caves nearby.

Behind the beach is the salt brush home where the Brown Pelicans make their nests. Rabida may be the only opportunity visitors have to see Pelicans nesting up close. 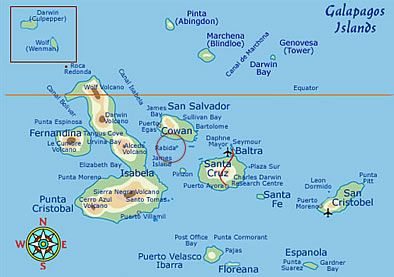 Up until recently, flamingos were also found in the salt-water lagoon, but they have since moved on to other islands, most likely due to a lack of food on Rabida. Nine species of Finches have been reported on this island.