Darwin Island is named in honour of Charles Darwin. Darwin Island is just several miles further North from Wolf Island. At only one square kilometre, it is the 18th largest island in the Galapagos Archipelago (making one of the smallest). With no dry landing sites, Darwin Islands main attractions are not found above the surface, but rather in the depths of the Pacific, which is teeming with a spectacular variety of marine life.

Darwin island rises vertically out of the Pacific Ocean, 600 miles from mainland Ecuador. 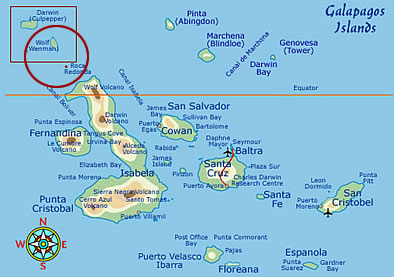 The Arch at Darwin Island is teeming with bird life. Many dolphins skim across the surface of the pacific ocean. Hiking is not allowed on this island, but from the water you can watch the behaviour of the great frigatebirds. To attract the females, the male bird inflates a bright red neck pouch. They perch on the cliffs with their pouches inflated and wings spread. The courtship is quite elaborate.

Great Whales pass through these waters. There are Humpback Whales, Shark Whales and Hammerhead Sharks in great numbers.

The Galapagos islands are listed as one of the 7 underwater wonders of the world and Wolf island and Darwin island are certainly the highlights, these small and remote islands can only be reached by live aboard dive trips.